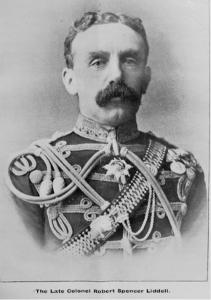 This Officer commenced his service in the Infantry, having been given an Ensignsy in the 15th Foot, (Now the East Yorkshire Regiment) on the 28th March 1858 without purchase. He was promoted Lieutenant, by purchase, on the 22nd March 1859, and exchanged into the Tenth on the 23rd November the following year; he obtained his troop buy purchase, on the 2nd May 1868, and was promoted to Field Rank on the 1st July 1881. On this date the establishment of Field Officers of a British Cavalry Regiment, which had formerly been a Lieut.-Colonel in command, and a Major, was increased to a Lieut.-Colonel Commanding, a Lieut.-Colonel Second in- Command, and three Majors.

On the 13th September of the same year, by the sudden demise of Lieut.-Colonel Bulkeley, he succeeded to the position of Second-in-Command, and obtained the rank of Colonel, by virtue of four years service as Lieut.-colonel on the 13th September 1885.

He was thus a Colonel before he became Commanding Officer of the Regiment, which he did upon the retirement of Colonel E A Wood, on the 1st April 1886.

He held the Command until the 13th September 1887, when, by provision of The Royal Warrant, having completed six years service as a Regimental Lieut.-Colonel, he was placed on half pay.

He was employed on the Staff as A.D.C. and Interpreter to the Commander-in-Chief, Bombay, from the 27th August 1869 to June 1872, and as Military Secretary from then to October 1872. As Adjutant to the First West Yorkshire Yeomanry from 1875 to 1876 he filled that important appointment, Adjutant to the Cavalry Depot, Canterbury from the 12th July 1876 until July 1880, when he rejoined the Regiment in India.

He continued his service with the Regiment until it left India in 1884, and took part in the operations in the Eastern Soudan in that year, commanding the Regiment during the period of the command of the Cavalry Brigade by Colonel E A wood.

He received the medal and clasp of El-Teb and Tamaai, the bronze Khedivial Star, and Third Class of the Order of the Medjidieh, and was mentioned in despatches.

In the autumn of 1878 he was ordered to France to attend the manoeuvres of the 6th and 7th Corps D’Armee, and subsequently the review of the 4th Army Corps under Marshall MacMahon, at Vincennes. In August 1882 he accompanied Sir Fredrick Haines to St Petersburg and was present at the manoeuvres at Krasnoe Selo, which took place in the presence of the Emperor of Russia.

In March 1886 he was honoured by command to accompany H. M. The King (Then H. R. H. The Prince of Wales) to attend the celebration of the ninetieth birthday of Emperor William I.

He was appointed to the Command of the 23rd Regimental District in June 1889, and commanded a brigade at the Cavalry manoeuvres on the Berkshire Downs in September 1890.

During his period of command of the Tenth, The Regiment took part in many important parades and celebrations, the most notable being the Jubilee of Her Gracious Majesty the late Queen Victoria.

The Regiment was, during the jubilee year, stationed at Hounslow, and on the fiftieth anniversary of Her Majesty’s accession, marched to London and lined the streets from Buckingham Palace, up Constitution Hill, to the top of St James’ Street. H. R. H. The Duke of Clarence, then a Captain in the Regiment was on parade with it.

On this occasion twenty five horses, selected for their appearance and colour (All brown) were provided by the Tenth to mount the Indian Native Officers who took part in the procession.

The Regiment also took part in the Jubilee Review before Her Majesty the Queen in the Long Valley on the 9th July, when His Majesty the King, the Prince of Wales and Colonel, marched past the Queen at the head of his Regiment, Prince Albert Victor commanding the right troop of the leading squadron.

A month prior to the Jubilee celebrations the Regiment marched to London, and lined the streets from Paddington to Holborn, on the occasion of the opening by Her Majesty, of The Peoples Palace in the West End, an institution the building of which is said to have been inspired by the late Sir Walter Besant’s book “All Sorts and Conditions of Men”. 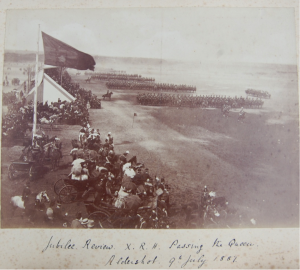 Soon after his succession to the command, Colonel Liddell obtained from the Commander-in-Chief permission to carry out a “Cavalry Raid” under conditions which were at that time a veritable innovation, and which has formed a precedent for many similar raids since. He was authorised to take the Regiment from Aldershot for three days operations under active service conditions, the stipulation being made that no expense be incurred by the public, and that only regimental transport be used. The raid was directed against an imaginary Army which landed at Portsmouth, successfully advanced and concentrated on the Hog’s Back, on its way to London. The Tenth started out from Aldershot on the 14th July 1886, and returned on the 17th. Great interest was manifested in military circles, and the movements of the Regiment keenly watched. The success of the raid may be judged by a letter, dated Horse Guards 3rd August 1886, which conveyed, to Colonel Liddell, the commendations of H. R. H. The Commander-in-Chief on the manner in which the march was conducted, reflecting great credit on him and the Regiment which he commands.

Another feature of Colonel Liddell’s command, which has borne prolific results in the Cavalry, was the purchase privately of a Nordenfelt machine-gun, and the receipt of sanctions to consider it part of the Regimental equipment. It was mounted on a two-wheeled galloping carriage, introduced by him, and was considered of such great service for Cavalry that six of the same pattern, with some improvements, were issued to other Regiments. When H. R. H. The Prince of Wales visited the Emperor of Germany, accompanied by Colonel Liddell, as stated above, — by the desire of H. R. H. –, a gun mounted on a carriage of the same pattern was presented as a present from England to Prince William of Prussia. Corporal (Afterwards Troop Sergeant-Major) F. Husstler was sent in charge of the gun and had the honour of explaining its use to the Emperor William I, and Prince William.

The gun accompanied the Hussars of the Guard throughout the manoeuvres.

To Colonel Liddell is also due the introduction of the present pattern of busby which is worn at home stations. It is a lower and lighter one than that previously issued, with all fittings and ornaments of a smaller size. Trial of it in the Tenth was authorised, and met with so much approval that the pattern was adopted for all Hussars and Artillery.

During Colonel Liddell’s period of command Their Majesties the King and Queen (then the Prince and Princess of Wales) visited and inspected the Regiment, and his Imperial Highness Prince William of Prussia (The present Emperor of Germany) also paid it a similar honour at Hounslow. H. I. H. Was accompanied by General Lowe, a distinguished cavalry Officer, who commanded an Army Corps on the Rhine. After inspecting the Regiment Prince William rode with it through a field-day, and charged with it, riding beside the Colonel. After witnessing the whole Regiment riding over the jumps on Hounslow Heath, the Prince addressed it, in English, in most complimentary terms.

Shortly afterwards, Colonel Liddell was the recipient of a portrait of H. I. H. In the uniform of the Hussars of the Guard, with his autograph, and the following words written below:

In remembrance of the 25th June spent with the Tenth Prince of Wales Own Royal Hussars, at Hounslow, 1887

Another memento of this visit is a large portrait, with autograph, massively framed, surmounted by the Eagle, which H. I. H. Presented to the Sergeants’ mess, which is one of the possessions most highly prized by the Members.

The Royal Warrant of the time limited the period of Colonel Liddell’s command of the Tenth to a brief space of time less than eighteen months, but short as was its duration, it was as full of incident as peacetimes can offer, and the influence of his command has left its mark, not only in the Tenth, but in the whole of the British Cavalry. Ever ready to grasp the situation of the moment, at all times prepared with the solution of it, courteous and kind-hearted, he was possessed of great literary abilities, and no biography of him would be complete that omitted to acknowledge the debt of all Hussars for his masterly and scholarly “Memoirs of the Tenth Royal Hussars” published by him in 1891. It is a work which could only have been completed by great sacrifices of time, and at considerable cost. These sacrifices he was ready to make for the Regiment, and there can be no hesitation in saying that his greatest and most coveted reward was the approval of those for whom he wrote them, – Officers and men past and present of the Regiment. The Editor of the X. R. H. Gazette gratefully acknowledges the incalculable assistance which Colonel Liddell’s work in writing histories of all matters connected with the Regiment.

Colonel Liddell, to the extreme regret of all his friends, and those who served under him, died at Cheltenham in 1903, having a month or two before attended the Regimental Dinner, and there spoke very eloquently of the subject dearest to him — his Old Regiment.