This Regiment is not only remarkable for an unprecedented record of victories, but also for the interesting history of the game, which is afforded to anyone who will study the records of it during the last thirty years.

In 1869 Polo was introduced to England by some members of the Tenth, who framed rules and made plans for the playing of the game. (The originals of these are in the possession of the Tenth to this day.) 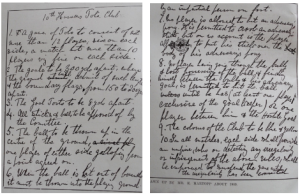 In 1871 The 9th Lancers challenged the Tenth, and in a very exciting contest, the Tenth won by three goals to two.

In 1874 Saw both these famous regiments in India. Conjointly they organised a committee to discuss the polo question, and in the year

1877 The two rival regiments met in the Inter-Regimental Tournament, when the 9th Lancers defeated the Tenth, and again in 1878. After this Polo was stopped on account of the Afghan War.

But upon their return to India the Tenth won the Tournament in 1881 and 1882.

1883 Saw the departure of the Tenth from India, but they laid the root of polo well grafted in India, for the Officers presented a cup to the Native Cavalry of Bengal for an annual contest, and at the same time presented a second cup to the British Infantry of India.

These two trophies developed the polo in India in a remarkable manner.

1885 saw the Tenth again on the polo fields of London, but it was not until 1888 that they won the Inter-regimental at Hurlingham – Mr E W D Baird, Lord Alwyne Compton, Mr (Major) Arthur Hughes-Onslow and the Earl of Airlie were a formidable team – but they had their old rival, the Ninth, to compete with. 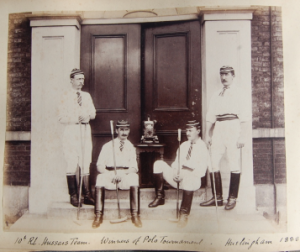 1893 saw these old rivals contesting the final of the Inter-regimental , and the Tenth again won the match, their representatives being  Lord George Scott, Captain (now General) C. T. Kavanagh, the late Lord William Bentinck and the Hon. W. T. Brand now Lord Hampton.It was shortly after this that the Tenth went over to Ireland.

Directly the South Africa War was at an end, the Tenth came to India, their station being Mhow. They purchased, at once, thirteen ponies of the Poona Horse, and with these ponies they all but won the Indian Inter-regimental of 1904, when they were just defeated by the Fifteenth Hussars by one goal in the final.

1905 recorded the success of the Tenth in both the Poona Open Tournament and the Poona Junior Tournament, but it was not until the year

1907 that the Inter-Regimental was won by the Tenth.

The Panjab Polo Cup was also won this year, their team being:

The Subaltern Polo Tournament was also won by the Tenth in 1907.

The Subaltern Polo Tournament was, curiously enough, inaugurated by a Tenth Hussar as well; for in 1904, Mr Cyril Potter presented a cup and thereby initiated this sporting Tournament. 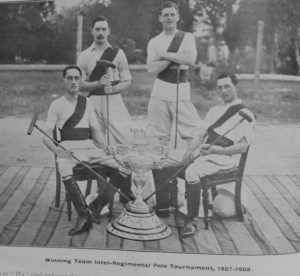 1908 records the Tenth again victorious in the Inter-Regimental. It is worthy of note that, even though two members of the team were Captains, yet the average age of the team was 23 years, — quite unprecedented and highly creditable to the Tenth, for their great trainer and mainstay was absent in England (viz., Major John Vaughan).

In 1909 the Tenth again won the Inter-Regimental, and in

Appended is a list of tournaments won by the Tenth Royal Hussars during their present tour of service in India:- 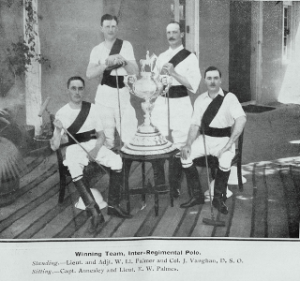 It will also surely find a place in the history of the Regiment that a Tenth Hussars has been selected to proceed to America to represent his country, and play in the international contest which is to be held in America in a couple of months.

With all the Empire, we shall watch with acute interest the progress of the games, and very naturally, in our ardent wishes for the success of our team, feel conscious of a subsidiary wish that Mr Palmes will prominently contribute to the victory upon which all our desires are now centred.

Writing an article on “Polo in 1910, and the America Cup” in the Polo Monthly, Ranger says: – “A list of players who have been invited to assist in the attempt to recover the Cup has been published. It is very gratifying to find that six out of the eight names are those of soldiers, who, since the Tenth started the game in England, have ever been the mainstay of polo.

On the occasion of winning our sixth Inter-Regimental Polo Tournament in succession, His Majesty, our Colonel-in-Chief, sent us the following gracious message:-

“I heartily congratulate the Regiment upon winning the Inter-Regimental Polo, and thus continuing their long record of success.”

Other messages of congratulations were received from—