I have tried to sort the photographs in the various albums into some sort of chronological order, and I have split the pictures from two of the albums that my Grandfather left into either images relating to his family or to the Regiment.

Unfortunately, like so many other photograph albums that have been compiled in the past, 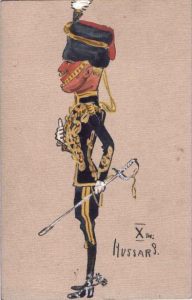 there are very few pictures that are labelled. I find this very curious for a man with, seemingly, a very organized mind. There are, therefore, so many people, both civilians and soldiers, who appear in the albums whose names are unknown to me and so many places that I cannot identify.

On looking through the seven hundred or so photographs below, should you find anyone whom you may recognise, perhaps a Grandfather or Great-Grandfather, or even just know where a snap was taken, I would be delighted to hear from you.

If you find a relative in any one of the pictures I would also be very happy to send you a copy of the photograph in the post.

I should like this site to be as much about the soldiers who have served with the Tenth Royal (Prince of Wales Own) Hussars or The Shiners as they are affectionately known, over the years from 1715 – 1969, as it is about my Grandfather and his Family.

I have added an extract from the brief history of the Regiment that was co- written by Major Pillinger and Lieut.-Colonel John Vaughan and printed in 1906, whilst the Regiment was stationed in India.

I have added an extract from the brief history of the Regiment that was co- written by Major Pillinger and Lieut.-Colonel John Vaughan and printed in 1906, whilst the Regiment was stationed in India.

This small booklet was produced to help instill a pride in the Regiment amongst all new recruits, and I have reproduced the period covering Grandpa’s service, including the detail of the two main campaigns where he was involved; i.e. The Sudan and Boer Wars. I have copied it word for word and his use of the pronoun we, especially where hard fought actions are concerned, make the narrative all the more vivid.

As an addendum, The Major retired from the Tenth in 1913, and after a brief visit home, went to live in Cairo. When War broke out in 1914, he joined the Egyptian Camel Corp, a troop of some 175,000 camels that were used as a supply vehicle for the war needs of the Middle East. In 1915 he was appointed Aide-de-Campe (ADC) but seems to have remained in the middle east, as I have a photograph of him in the Garden of Gethsemane dated 1917. He is with two other soldiers and a local looking man, and one of the soldiers is almost certainly General Allenby, so it does seem very possible that he was ADC to Allenby when he lead the victorious allied troops into Jerusalem after its capture, when they marched in on foot as opposed to mounted, as a gesture to the inhabitants of the city to indicate acknowledgement of their mortality in a city of such religious importance. 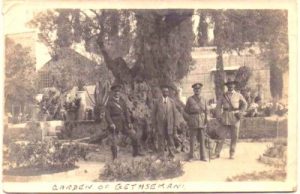 This, then does rather lead on to the possibility that he was previously ADC to Maxwell and Sir Archibald Murray before Allenby. This is at present speculation and will bow to further research.

There is then one last question that begs: what was Major Pillinger doing when he was living in Bombay and my Father arrived?

to the Soldiers of the Regiment lost in the Afghan Campaign in 1878-9, the year he joined. One Officer and 46 NCOs and men were drowned crossing the Cabul River and a further 38 men died of cholera on the way back to Rawal Pindi, when an outbreak set upon the Regiment in the Khyber Pass.

Looking back at such a loss from today’s perspective seems to me to bring the reality of the Victorian era into very sharp focus.