THE ILLUSTRATED SPORTING AND DRAMATIC NEWS

The Tenth Hussars and Sport

Although for the last thirteen years the Regiment has had no opportunity of winning fresh laurels on the field, it has throughout that period maintained its foremost place in the world of sport, and in 1886 a point-to-point steeplechase took place between five subalterns of the Tenth, and an equal number of the Blues for a cup presented by the Prince of Wales. This was held close to Stranton Audley, over a course selected by Lord Chesham, the master, and Lord Valentia, the late Master of the Bister, both old Tenth men. The Prince of Wales, and a large number of spectators, witnessed this sporting affair in which the Hussars were represented by the Hon. George Bryan, Messrs. Hughes-Onslow and Baird, the Hon. A. Lawley, and Mr. Kavanagh, whilst Lord Binning, and Messrs. Ferguson, Fenwick, Vaughan-Lee, and Williams rode for the Blues. Bryan and Hughes-Onslow being first and third at the finish, the Tenth were declared the winners of the match.
In 1888 Mr. Fenwick’s Bertha, ridden by Mr. Hughes-Onslow, won the Grand Military Gold Cup, and Mr. Baird’s Playfair the Liverpool Grand National. Major Hughes-Onslow, as he has now become, is a powerful, resolute horseman, and he has won his second Grand Military this year on Major Fenwick’s County Council, whilst Colonel Fisher, one of the best soldier jockeys of his day, and who commands the regiment, may still be seen in the saddle at regimental meetings. At cricket also the Tenth could always hold their own, with such men as Allsopp, who had played for his University, Hughes-Onslow, an old member of the Eton eleven, Fisher, who had played for Harrow, Lord George Scott, an old Oxford “blue,” and Brand, once captain of the Eton eleven; but it is on the polo ground perhaps that this all-round sporting regiment has made itself most famous, and as this popular game owes its existence in this country to the offices of the Tenth Hussars, a short history of polo in the Tenth may not be out of place here.
It was in 1870, when the Tenth were at Aldershot, that the first game of polo ever played in this country took place on Cove Common. Poor “Chicken” Hartopp was a leading spirit in the new departure, and the first rules of polo, of which the original copy is still in the regiment, were drawn up by him. The new game “caught on” at once, and on the 23rd June 1871, a match took place at Hounslow between the Ninth Lancers and the Tenth Hussars, of which the following description is taken from a newspaper at the time.

“Hockey on Horseback”
“Nearly all fashionable London journeyed from town to Hounslow on Tuesday to witness a new game called “hockey on horseback” between the officers of the Tenth Prince of Wales Own Royal Hussars from Hounslow Barracks and the offices of the Ninth Queen’s Royal Lancers who had come over from Aldershot. The game took place on Hounslow Heath and the various equipages quite surrounded the space allotted to the players. Four upright posts, some twenty feet apart, marked the goals through which the ball (a small sphere of white bone) had to be driven by the players before either side could claim any advantage. The sticks used were in the form like those used for hockey, of ash and crooked at the end, and with these the ball was often struck a considerable distance. The distance between the goal post was a little under 200 yards, and the players having taken up position in front of their respective goals, the ball was thrown in the centre of the ground by a Sergeant-Major of the Tenth Hussars, who then galloped off – when each side then galloped for the ball at the best pace of their ponies. The Tenth appeared in blue and yellow jerseys, and the Ninth in parti-coloured shirts of blue and red, and both sides wore mob caps with different coloured tassels attached. The game, which was imported from India, and which has been for a long time in vogue amongst the Minipoories, one of the frontier tribes, was watched with the keenest interest by the numerous and aristocratic company present. The game lasted for an hour and a half with an interval of ten minutes when half time had been played. The players, who numbered eight on each side, and who were mounted on active, wiry little ponies about 12 ½ hands high, were as follows: –

At the end of the prescribed time the Hussars had gained three goals to two gained by the Lancers; and although the general remarks made it evident that the new game was one of most fitted for cavalry soldiers, it was admitted by all who were looking on that it was more remarkable for the strength of the language used by the players than for anything else. Mr. Hartopp on the side of the Tenth Hussars, and Mr. Moore on that of the Lancers were much applauded for their activity throughout the game and the speed of their ponies.” 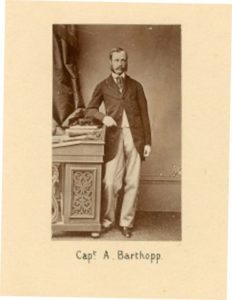 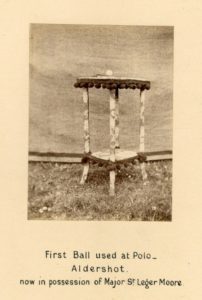 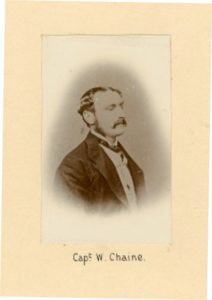 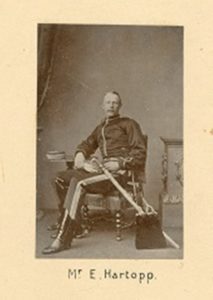 When the regiment again went out to India it went in more keenly than ever for polo and did more perhaps than any other to make it what it has since become, the game “par excellence” of the British Army. In 1877 the Inter-Regimental Tournament was inaugurated at Meerut, Captain St. Quentin of the Tenth being appointed as Secretary, and after a prolonged struggle his regiment was only just beaten in the final tie by the Ninth Lancers. In 1879 and 1880 no tournaments were held owing to the Afghan War, but in 1881 we find the Tenth once more to the front, and beating the Rifle Brigade by two goals to one in the final tie of the tournament, which was that year played at Umballa. 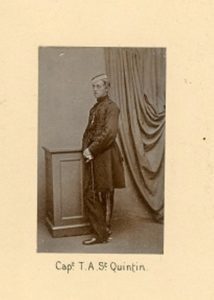 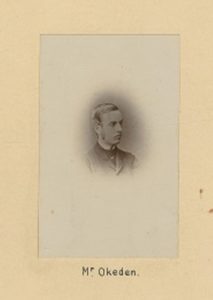 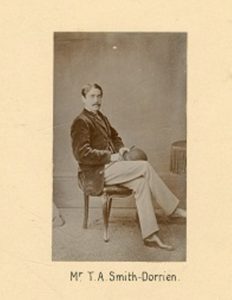 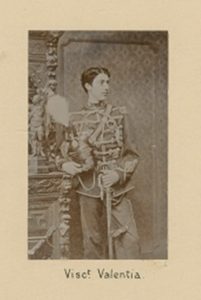 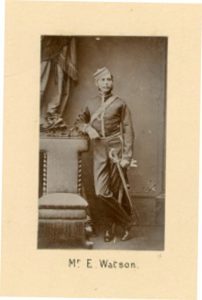 In 1882 they repeated the performance at Meerut. It was in the following year that the officers of the Tenth Hussars gave a cup to be played for by the Bengal Cavalry, the Punjaub Cavalry and the Central India Horse. The competition for this trophy produced a great number of good matches, until in 1888 the 18th Bengal Lancers won it outright and kept it, and it now adorns their mess table. Lord Airlie also presented a cup to be played for annually by the infantry regiments in India. This too has been won outright, the Durham Light Infantry, the best team ever seen in India, becoming its possessors. The same keen poloist also had a well sunk close to the divisional Polo Ground at Lucknow, for the benefit of future players, which was named after him, and bears the following inscription: –

A noble game we played of yore,
Perchance, my sons, you play it still,
Perchance some thirty hooves or more,
E’en now the air with thunder fill.

Amen! But if now David’s Well
No longer floods the thirsty ground,
Yet while thirsty soles while drinking tell,
How ‘tis that here a well is found.

Before leaving India, the native cavalry presented a cup to the Tenth Hussars in commemoration of their having promoted the Indian Native Cavalry tournaments.
On their return to England the Tenth polo team were constantly to been seen at Hurlingham and Ranelagh; and in 1886 it brought back the Irish Military cup from Dublin, where it beat the Eleventh Hussars by five goals to none, in the final tie of the tournament. Two years later the Tenth beat their old opponents the Ninth by five goals to none at Hurlingham, and won the Inter-Regimental Tournament. In 1893 these two celebrated polo regiments again fought out the final battle at Hurlingham, victory once more resting with the Hussars by three goals to two; and in the following year they took the Irish Military Cup, a victory that they repeated two years afterwards. It is doubtful if they ever had a better team than that which made such a bold bid for victory in the Inter-Regimental Tournament last year. They had not the best of the luck, as after winning all their matches in faultless style, they had to meet the Inniskilling Dragoons for the final tie before their ponies had quite recovered from the effects of their severe struggle with the Blues, a very good and well mounted team. The Inniskillings were an exceptionally heavy, hard-riding and hard-hitting lot and their ponies were certainly fresher than those of their opponents; but it was only after a very even, fast, and exciting match that the Hussars were defeated by five goals to three. Their this year’s team may not be quite so well together as that which so nearly proved victorious last year, nor are their ponies quite so handy, a point for which this regiment is so famous; but these are details which will of course be put right before their representatives enter the lists at Hurlingham in July next, and that it will take an extra good team to beat them is quite certain. Two Hurlingham, two Indian and three Irish Inter-Regimental Cups, one Irish subalterns’ Cup and a place in the final ties of no less than twenty-one tournaments is the proud record of the Tenth Hussars, the pioneers of polo as it is now played wherever the British flag waves. Some very interesting illustrations of this portion of the regiment’s career will be seen amongst the pictures which accompany this article, amongst them being a reproduction of the first rules of the game, to which allusion has already been made. The regiment has the ball – a whitened cricket ball – used in the first game ever played. I addition to the numerous trophies won at different times by the representatives of the Tenth Hussars on the race-course and the polo field, no less than six pig-sticking cups have fallen to its share, these being the Kadir cups if 1887, 1881 and 1882, won respectively by Captain St. Quentin, Mr. Fisher, and Mr. George Bryan; the last named of whom won the Ganges Cup in 1880 and 1882, whilst Lord Chesham won it in 1877.
In conclusion it only remains to notice, that eminent as the Prince of Wales Own Hussars have always proved themselves in every form of sport, they were never better represented in this direction than they are at the present moment; whilst the fame of their past valour in the sterner field of war is not only safe in the hands of its present holders, but likely to be made brighter still when their squadrons are again marshalled for the fray. Amongst the officers now in the regiment, its popular Lieutenant-Colonel, Ralph Broomfield Wellington Fisher, a well-known cross-country horseman, and thorough all-round sportsman, served in the Afghan war of 1878-80. He was all through the operations in the Khost Valley, in the Shutargardan, and round Cabul, and took part in the march to Kandahar, during which he was three times mentioned in despatches. He also acted as transport officer with the Masood Wuzeeree expedition. Major Durham was also with the Tenth in Afghanistan, and took part in the battles of El-Teb and Tamaai. It is obviously impossible to do full justice to such an eventful history as that of the Tenth Hussars in just one article; but enough has probably been said to give some idea of the fame they have won in both war and sport, and of the fashion in which they have merited the proud distinction of being commanded by His Royal Highness the Prince of Wales.