The Recent Disaster of the Tenth Royal Hussars

The following letter from a young man, a native of Norwich, describes the recent disaster of the Tenth Royal Hussars, a regiment well know in this city :-

“On Monday night we received orders to shift from Jalalabad at night. I with B Troop and three other troops to turn out at 12.30 p.m., and A Troop (my troop) and C Troop to turn out three hours earlier, the last two troops to cross the river. At about 11.00 p.m. there were horses galloping all over the place and no-one on their backs, so I, with others went to see the cause, and to our sorrow we found all the saddles quite wet, and came to the conclusion that all their riders were drowned. 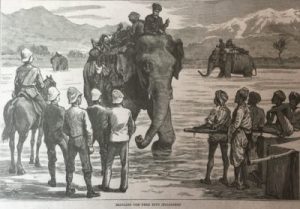 So a party that were not turning out of camp that night took the horses back to the river, and then heard the worst – that the poor fellows who could not swim, and many who could, were drowned. But when I left camp at 12.30 p.m. we knew but little about it, only what Sergeant Roper (who luckily swam his horse back) said – that the leading part of the squadron (or two troops) got over all right, and the remainder went off too much to the right, did not follow their front, missed their way, and went out of their depth.

I have crossed it quite safe in the daytime, but many have not. The next day we got the bad news that out of the 76, all told, 46 were missing, and one officer. About seven men got back that night, and some crossed quite safe.

On April 1st they were looked for the missing, and found 19, who were buried in one grave on the 2nd April. The officer and 27 are still missing. The river has a very strong current, and I hear that one body was picked up six miles from where the alarming accident took place. 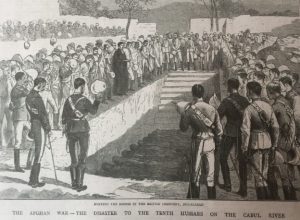 Sergeant Green is one of the missing, although it is said that he is the man who was picked up at Ali-Began six miles off. Five sergeants and three corporals were drowned; a great many carbines were lost. Good swimmers could not swim with their swords and clothing on them. There is £10 offered for the officer’s body and £5 each for the remaining ones. Five men were married and 41 single.

By kind permission of the British Library Board

Second son of William H. Harford, Esq., of Barley-wood and Lawrence-Weston, Francis Hervey Harford was born in March 1858, and educated at Winchester and R.M.C. Sandhurst. Passing out from Sandhurst in 1877 in the first class, he was gazetted to the 16th Foot, then serving in Ireland, and transferred to the 10th Hussars the same year (November 23). He sailed from England in the following month, leaving Portsmouth on board the Troopship Euphrates on December 30, and joined the Headquarters at Rawal Pindi. On the outbreak of the Afghan War, he went with the regiment into the Khyber Pass, and was present at the taking of Ali Musjid on November 21.

Forming one of the ill-fated squadron which was to accompany the force directed to join General Macpherson’s column in the second Lughman Valley expedition, he was swept away with the rest of the squadron, during the night of the March 31, 1879, in the disastrous fording of the Kabul River at Kala-i-Sak, and will one of those found missing when the roll was called after the accident. Sub-Lieutenant Harford, 46 N.C.Os. and men, and thirteen horses were drowned in this disaster, which was the subject of a famous poem by Rudyard Kipling. (See below.)

His body was found in the beginning of April, and was buried with military honours on the evening of the same day, the General and all the officers in garrison following it to its last resting-place.
‘Few young soldiers have gone to an early grave more deeply regretted than the gallant but ill-fated subject of this brief memoir. His life was one of the finest promise, and there are none who knew him who could doubt that that promise would have been fulfilled to the utmost had he lived.’
His missing sword will amazingly be found some 15 years later (during the Chitral expedition) in the roof beams of an Afghan hut at Remorah.