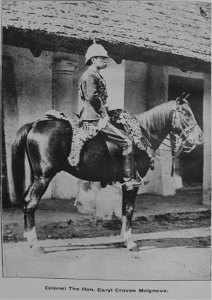 Writing of Colonel Molyneux affords the opportunity to make reference to the oft-quoted proverb that “history repeats itself inasmuch that he, as in the case of our present Commanding Officer, commenced his soldiering days in the 7th Hussars.

He was given his first commission in that Regiment as Cornet, on the 6th June 1858, when the old “Purchase Act” was in force.

Very soon After – on the 1st June of the same year – he exchanged with Captain Baumgarten, and was promoted to Field Rank on the 17th August 1870. At this time the establishment included only one Major, and he was second-in-command.

He succeeded Colonel Valentine Baker in command, having been promoted Lieutenant-Colonel on the 27th March 1873.

He had really commanded for some time previously, in the absence of Colonel Baker, on Staff employ, and to him fell the task of preparing the Regiment for service in India, during the year of its stay at Colchester up to the date it embarked, on the 9th January 1873.

On that day it proceeded by rail to Southampton, and boarded H M India troopship “Jumna”, one of a fleet of ships belonging to, and manned by, a crew of Officers and men of the Royal Navy.

This fleet performed all the trooping services between India and England in those days.

The Regiment’s first station was Muttra, where the only troops was one British Cavalry Regiment and absolutely no European civil population. The nearest railway station at the time was Hattras Road, thirty miles from the cantonment. Here the experience gained by Col. Molyneux while serving with the 7th Hussars in India, served the Regiment in good stead. His knowledge of the customs of the country, of the habits of the natives, the requirements of men and horses, and the climatic conditions undoubtedly added largely to the wellbeing of all, and assisted the Regiment to settle down in its novel surroundings more rapidly and agreeably than would have been the case had not the advantage of his former experience been forthcoming.

During Col. Molyneux’s command, the first years of the Regiment’s service in India, always a trying and most exacting time for a Commanding Officer, the records prove it to have been a period which reflected great credit on all ranks. Nothing but praise was accorded by all Inspecting and General Officers, whether reporting in cantonments, on the line, or in camps.

Nor was the lighter side of soldiering allowed to lapse.

A pack of fox-hounds brought from England was hunted by him, and under his direction and personal supervision every form of sport was encouraged. Game of all kinds, feathered and furred, abounded in the neighbourhood, which provided excellent sport for all ranks : many of the Non-Commissioned Officers and men soon became very keen and expert shikars, and as a result, the messing of their troops was generously supplemented by their means.

A Non-Commissioned Officers’ Polo Club was formed. The Regiment was mounted on small Persian, Arab and country-bred horses and “casters” were bought and maintained by the members. A remarkable degree of efficiency was attained by several, notably by Corporal (afterwards Rough-Riding Sergeant-Major) Wright, whose eldest son is serving with us.

A Regimental Theatre was instituted, and concerts and other entertainment was given at frequent intervals.

Sanitary methods were carefully studied and perfected, and the cantonments greatly improved by the substitution of open brick walls for the old mud ones which divided the compounds and enclosures round the bungalows from the main road; many young trees were planted, a new road with a venues of trees, leading from the Officers’ Mess to the lines, was made, and many other improvements effected.

Col. Molyneux also introduced for general wear on parades and fatigues a regimental pattern of serge jacket, which at the time, with the tunic, was the only jacket or coat included in the cavalryman’s kit.

The new Garment was subsequently adopted by the Government of India, and is to this day, the “sealed Pattern” one for British Cavalry. Needless to say, its introduction was greatly appreciated and that it added to the comfort of the wearers.

These, and similar measures resulted in a bill of health exceptionally good for a Regiment new to India, and it is worthy of record that during its first three years and four months’ service in the country, only one case of death from enteric fever is recorded.

The Regiment today acknowledges its indebtedness to Col. Molyneux, congratulates him (A little in advance) on his seventy-second Birthday on Sunday next, and wishes him heartily many happy returns of the day. He is one of that gallant band of veterans who withstood the horrors, fatigues and privations of the Indian Mutiny, having served with the 7th Hussars in that campaign from February 1858 to March 1859, and was present at the repulse of the rebels’ attack on the Alumbargh, at the famous and protracted siege of Lucknow, the affairs of Barree and Sirree, the action of Rawabganj, the occupation of Faizabad, throughout the Byswarra campaign, also the Trans-Gogra campaign, with the pursuit to Rapti, and the advance into Napal.

He retired by sale of his Commission, on the 31st May 1876, having completed 17 years 360 days service, of which exactly 16 years was Tenth Hussars’ service.