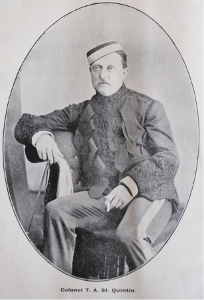 Colonel St. Quintin was gazetted to coronetcy in the Tenth on the 30th December 1859, promoted Lieutenant, by purchase, 16th January 1863, and obtained his troop, by purchase, on the 17th August 1870. On the 22nd November 1879 he received a Brevet Majority, for conspicuous services in the Afghan War, and became a Regimental Major, on the increase of the establishment of that rank, on the 1st July 1881. On the 1st April 1886 he was promoted Lieutenant-Colonel and Second-in-Command.

A few months later, on the 2nd August 1886 he exchanged into the 2nd Dragoon Guards. From the time he received his first commission in the Tenth he served continuously with the Regiment until 1882 when he was appointed re-mount agent in Calcutta. He relinquished that appointment in 1887, in July of that year; he was selected to command the 8th Hussars.

His total service in The Tenth was 26years, 225 days. With the Regiment he took part in the Afghan War, 1878-79, commanding “D” Troop throughout the first phase of the campaign, was present at the assault and taking of Fort Ali Masjid, and at the actions at Fatehabad, where he acted on the staff of Brigadier-General C. Gough C. B. V.C. He was mentioned in despatches, received a Brevet Majority, and was awarded the medal for the campaign with the clasp Ali Masjid.

Possessing every qualification necessary to make an ideal Cavalry Officer, and a knowledge of horses which could not be surpassed, Colonel St Quintin, from the first days of his service, was accorded a reputation as a soldier and a sportsman, which he merited and maintained to the end of his active soldiering days.

No branch of sport was there in which his name did not figure conspicuously. Within a few months of his joining he was a useful member of the regimental cricket team, his play assisting materially to those successes, and adding to the fame of the Regimental eleven, at Norwich in 1860 and 1861, in York in 1861 and 1862, and subsequently in Ireland and in England up to the time the Regiment embarked for India in 1873.

In the Regimental racing records, Colonel St Quintin occupies a high place. In the first year of the steeplechase for the cup, presented by the late Colonel Valentine Baker in 1864, it was won by Lieutenant St Quintin’s Ballyraggett ridden by his owner; in the following three years, 1865-66-67, he repeated the feat on the same mount in the Tenth Royal Hussars Cup Chase. And many a meeting in many military stations, his fame as one who is hard to beat between the flags, is still, after just half a century, sufficiently verdant to afford interesting gossip.

As a cross-country rider he ably sustained that reputation built up by the Tenth as first-fighters in the Sport, par excellence, the sport of Kings and Hussars, fox-hunting. In many a hunting field in England and Ireland, the name “St Quintin of The Tenth” has stood as the synonym for all that is desirable in a follower of the hounds.

In the history of English Polo, Colonel St Quintin may claim a position and instrumentality in introducing and promoting the game in England, which, if not the first, is undoubtedly second to none. We have read his admirable and able article in Blackwood’s Magazine on the history of the game, how in 1869 “Chicken” Hartopp, reading an article in The Field on “Hockey on Horseback in India” was prompted to exclaim:- “By Jove, this must be a good game!” This happened in the Officers’ Mess tent of the Tenth during manoeuvres at Aldershot. The enthusiasm of those present was kindled and Mr St Quintin and others sent for their chargers and played an impromptu game with heavy walking sticks and a cricket bat. Knocking the ball about with a short stick from the back of a tall horse was not the easiest thing to do but it appealed to the essayists, and – well, that was the beginning of the game in England.

On the 23rd June 1871, the first match in England was played by teams of eight a side between The Tenth Hussars and the 9th Lancers, and Mr Quintin was one of the former, which was the winning side. The game was played at Hounslow, and attracted a great number from London and other places, as it is chronicled “that Hounslow Heath was crowded with spectators.”

Eighteen months later the Regiment embarked for India; on arrival there the game was again taken up, and under more favourable conditions obtainable by the acquisition of a pony of suitable class and height, the choice of sites affordable by the nature of the ground, and the advantages of a game in a country where a short and sharp game is essential, it became very popular, was played regularly, and brilliant players began to appear in the Regiment.

At the Imperial Proclamation at Delhi 1875-76, the first Inter-regimental matches were arranged. The qualifications of Captain St Quintin were apparent to all; he was requested to undertake the organisation of the games, and became the Secretary of the movement. He acceded to the request, and thus was the Inter-Regimental Polo Tournament in India launched under the most favourable auspices.

The first tournament took place in 1877 at Meerut, when the Tenth and 9th Lancers were left in the final; the 9th won by one goal to love. In the following year the same regiments were the finalists, and again victory was with the 9th by 5-2. Captain St Quintin played in both these matches. The Afghan War then intervened, the tournament was suspended in 1879-80and St Quintin did not figure in the tournament whilst with The Tenth. A player, who frequently appears as one of the earliest regimental teams, places him as the second best player of his day, running the first choice very close.

In 1877 Captain St Quintin carried off that prize which is perhaps more prized than any other in India – The Kadir Cup Riding his grey Arab horse Vivian, we are told that never before was greater dash shown, never better judgement, or more conspicuous coolness than that which the winner displayed on this occasion.

Volumes could be filled with the history as a sportsman of Colonel St Quintin; much could be said about the pleasure he now gives us by his occasional contributions to the magazines; fascinatingly readable accounts of his tremendous experiences in many fields, thereby introducing us to many lovable animals he has owned or known.

Happily he is likely to fulfil our earnest hopes that he will be spared for many more years to meet and delight with his cheery reminiscences, his Old Comrades of the Tenth.