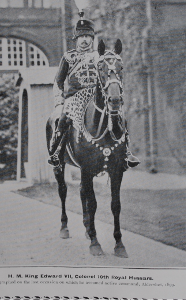 “My Old Regiment: old Regiment, my Regiment you mean!

In these words our late Royal Colonel gently reproved an Officer of the Regiment who was conversing with His Majesty, some time after the close of the South African War in 1902.

The Officer addressed, prompted by the fact that on His Majesty’s accession to the throne, Lord Ralph Kerr had been appointed to the Colonelcy of The Tenth, referred to the Regiment as “Your Majesty’s old Regiment”.

There is no doubt that the reply quoted above was the key note of King Edward’s affection for the Regiment ever since he was first associated with it.

Major-General Lord Ralph Kerr – our Colonel – Colonel St Quintin, and Colonel the Hon. C. C. Molyneux, who were serving Tenth Hussars at the time, can testify to the pride and extreme gratification of all ranks when it was announced in the London Gazette that the Regiment had been honoured by the appointment to it as Colonel, of His Majesty, then Prince of Wales. This occurred on the 16th April 1863, since which date, until 6th of the month of May this year, the name of our beloved King was the first on the roll of the Tenth Hussars.

It is no ordinary void which is created by the disappearance of a revered name, and an honoured personality familiar to us during a period which extended over 47 years and in this case every circumstance combines to render it impossible to depict our sense of infinite magnitude of our sad loss. This feeling on the part of every member of our Regiment is absolutely personal; we can only find the weakest of terms to express out grief; to describe the shock caused by the afflicting news which passed round the station early on the morning of the 7th May. At first, in the absence of official intimation, credence was withheld, but the following morning, alas, brought conformation of the ill tidings.

Approaching the sad subject solely from the Regimental aspect, we can affirm that every Tenth Hussar has lost, not only a Royal Chief, but one who, at all times, amidst the many cares of State and kingly duties, never ceased to be solicitous for the welfare of the Regiment, who unceasingly followed its career with interest, and gave frequent proofs identifying himself with it in his capacity as Commanding Officer.

How His Majesty visited and commanded the Regiment at Delhi in 1876, and on the 16th January entertained the whole of the N.-C. Officers and men at dinner, and how he attended the dinner in person, were incidents exultantly narrated by the participant for years afterwards, and our recollections go back to the frequency of visits during home service when, in his capacity as Commanding Officer, his remarkable keenness in all matters regimental was revealed in convincing manner. No detail, not even the smallest change of uniform or of a badge, was too trifling to engage his attention. To cite a few instances, we go back to a visit and assumption of command in 1884; the Regiment arrived at Portsmouth on return from a tour of foreign service on the 20th April 1884, when a telegram greeted it conveying His Majesty’s congratulations, and regret that he was prevented from meeting it in person.

At Shornecliffe Camp, five weeks later, on the 27th June, he visited the Regiment as its Commanding Officer. He was accompanied by Her Majesty Queen Alexandra (then H. R. H. The Princess of Wales) who honoured the Officers, N.-C. Officers and men by personally presenting to each the medals for recent operations in the Soudan. After the presentation, His Majesty, addressing the Regiment, said “I was glad to have the pleasure of seeing you in India. Since then you have been through the campaign in Afghanistan, and you have only lately returned from an arduous campaign in the East.” After further congratulations H. M. added “It is now twenty-one years since Her Majesty conferred upon me the honour of Colonel of the Tenth Hussars, and I am proud to be connected with it.”

Colonel Valentine Baker (Baker Pasha) and many other former Officers of the Regiment, were among the distinguished company present on this occasion.

A little over a year later, on the 19th August 1885, H. M. repeated the visit, this time to Aldershot, where we were quartered. He was accompanied by H. R. H. Prince George of Wales (now our Gracious Monarch), H. R. H. The Duke of Connaught, The Grand Duke of Hesse, several former officers of the Tenth, and other distinguished Officers. H. R. H. The Prince Albert Victor of Wales, (afterwards The Duke of Clarence) as at the time serving as a subaltern with the Regiment, thus bringing together four members of the Royal Family, two of whom were on the active list of the Tenth.

Many brief visits were paid by our Royal Colonel during the next two years of service at Aldershot, and frequent inspections were also made by His Majesty. At two reviews of the Aldershot troops by Her late Majesty Queen Victoria, he commanded and lead the Regiment past the saluting point, and at the celebrated Jubilee Review on the 9th July 1887, he marched past Queen Victoria at the head of the Regiment, Prince Albert Victor commanding the right troop of the leading squadron.

On the 19th March 1889, His Majesty visited the Regiment at York, assumed Command and lived with it in the barracks until the 21st. During his command he made most searching inspections of everything connected with the interior economy and drilled it on the Knavesmire, marching from and to the barracks at its head. The Regimental point-to-point races took place on the 20th, at Marston, some six miles from York, attended by His Majesty. The race of the day was won by Captain A. Hughes-Onslow; H. R. H. Prince Albert Victor rode his own horse and finished fourth.

The final occasion on which Regimental orders were issued by His Majesty as Colonel Commanding, was in June 1899; these included an order for the Regiment to parade for inspection by H. R. H. The Duke of Connaught who pronounced that “He found the Regiment in a splendid state of efficiency, fit to proceed anywhere, for any service for which it may be required.”

In less than five months from then the Regiment was on its way to the South Africa War, in which it served until the cessation of hostilities; during the whole period all ranks were encouraged and gratified by the unbound interest manifested by His Majesty in all their doings. Before the end of the War, on his accession to the throne His Majesty ceased to be The Tenth’s Colonel, and became its Colonel-in-Chief.

His solicitude for his Regiment however was not lessened; every matter affecting it was discussed by him with the same keenness as before, and no prominent deed or date was allowed to pass without testimony by cable that the Regimental Association with it was present in His Majesty’s memory. So recently as March last, our readers will recall, he cabled his congratulations on the win of the Inter-Regimental Polo Tournament.

We know, too, that His Majesty was a keen soldier, and that he was greatly disappointed, when for obvious State reasons, it was not considered advisable that his wish to see active service in Egypt in 1882 should be acceded to. This was a penalty of his exalted position which he ever deplored.

Every Tenth Hussar shares the Nations grief on the loss of an illustrious Monarch who will ever stand out pre-eminently in the world’s history, and their grief is beyond the ordinary, in that they also lost a Chief to whom all turned with Regimental confidence, to whom they gave the most unstinting loyalty, remembering always the lustre his connection with their Regiment imparted to them in it. 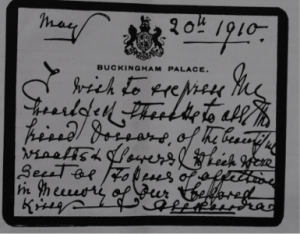 Surely, never were words more applicable than those which Shakespeare spoke by the mouth of the Duke of Norfolk:-

“Until the heavens, envying earth’s good hap, add an immortal title to thy crown”

Yet again did Her Majesty exhibit Her thoughtfulness, by sending to the Officer Commanding the following autograph card of acknowledgement of our wreath: