One hundred and ten years after my Grandfather, Major Roland Pillinger, first edited Issue No. 1, Volume I of the X. R. H. Gazette, it is a wonderful honour to be asked to produce an article for the Shiners’ Newsletter by the present Editor, Alan Powney.

In all but the very first issue, my Grandfather wrote a short valedictory to a past Officer of the Regiment. The first was Major General Lord Ralph D. Kerr.  The subject was not always a Commanding Officer, Captain Charles Stanyforth Greenwood being a case-in-point.

One Officer, however, that is a great note by his absence is H. R. H. The Duke of Clarence, who, as an Officer of the Tenth (Prince of Wales Own) Royal Hussars, and future Monarch, attained the rank of Major. 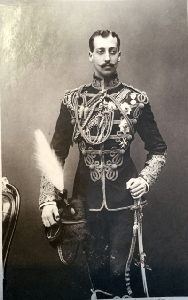 HRH The Duke of Clarence

H.R. H. The Duke of Clarence was gazetted into the Regiment on the 7th June, 1885. Having separated from his close companion and assistant Mr. Dalton, who had accompanied the Prince for his earlier formative years and Naval Service on the ships Britannia and Bacchante, and their extensive tours of the globe, a new Equerry was appointed, in Captain the Hon. A. Greville, and later Captain Holford.

“High rank alone had been sufficient reason why Prince Albert Victor, the future King, should join a cavalry regiment of brilliant reputation; his fine horsemanship was yet another reason. Concerning the choice of regiment there could hardly be a moment’s hesitation; certainly no better regiment could have been chosen than the Tenth Hussars.”

The Colonel of the Regiment was the Duke’s Father, Field-Marshal His Royal Highness the Prince of Wales, to give the future King Edward VII his full military title.

The Prince joined the Regiment on the 6th July at Aldershot, where they had been stationed for only a few months, having recently moved from Shornecliffe, which was their first station following their arrival from a ten year deployment in India, and having fought a brief campaign in Sudan on their way home.

He joined the Tenth as subaltern, and was soon set to work on drill and in the riding school. His day started at 6.30am and, even though he was a noted horseman he was kept in the riding school a full six months; no favours seem to have been shown because of his status.

Like most Officers at the time, off-duty periods were somewhat less soldierly however, and the disciplinary system may have made a nod to his bloodline; the Prince appeared on duty one day without a belt and his fine for so doing was six bottles of champagne! Polo and lawn tennis also featured quite regularly, but amongst these leisure activities the pretty constant drill and attendance at riding schooling carried on.

Being so close to London his Father and other members of his family were at hand, and on the 14th August records state “Attended drill under C. O. In the Long Valley – First time on Parade”.  On the 18th the Prince returned from a trip to London with the Prince of Wales, Prince George, and Colonel Wehrner, and the following day the Prince of Wales inspected the Regiment.

It is interesting to note that The Memoir of the Duke of Clarence notes that “he had a certain shrinking from the robust horseplay which had been known to exist among subalterns, although the Tenth was about the last regiment in the world which it was likely to be carried to excess”. The Duke was seen a somewhat delicate individual and soldier. 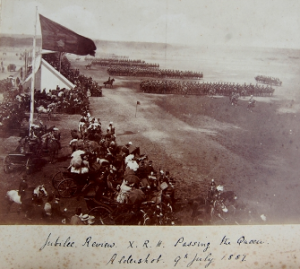 The Tenth at the Jubilee Review at Aldershot 9th July 1887

With the ending of riding school the Prince took a month’s leave, and attended several functions in London and the south, notably dining with Lord Airlie, who was also a Tenth Hussar. (When the Tenth was diverted to Sudan to fight, Lord Airlie had already arrived home, but on hearing that he was about to miss a fight, chartered a large ship to bring him back to Sudan. He was the only passenger!)

In early 1887 the Duke passed his examinations following the garrison course of instruction, and the Regiment moved to Hounslow. From there the Tenth took a leading part in Queen Victoria’s Golden Jubilee celebrations, on which occasion he was promoted to Captain.

When the Regiment moved to York in 1888 the Prince of Clarence remained fully engaged. Several letters survive that he had written to various friends who had asked him to holiday or spend a few days. Many of these decline their kind invitations because of Regimental duty.

In March 1889 the Commander-in-Chief, the Prince of Wales, took command and  spent three days with the Regiment, reportedly living as “one of the Officers”. The Regiment held a point-to-point, and Prince Albert came in fourth. The Prince of Wales carried out an inspection at Knavesmire, and personally led the Regiment back to barracks.

In November of 1890 the Prince Albert sailed on the Osbourne to undertake a visit to India, where he travelled extensively and enjoyed a considerable number of days shooting. He saw a great deal of the country and received many of the principle chiefs, Maharajahs and Governors. The Prince shot about three tigers, the largest of which measured 9ft. 6 ins.

The return journey was made on the S. S. Assam with a break for eight days in Cairo.

On his return the Prince rejoined his regiment, which by then was stationed in Curragh, Northern Ireland. Within weeks they moved to Dublin. In December 1891 the Duke became engaged to Princess Victoria Mary of Teck.

That Christmas the Prince Albert took leave from the Tenth and spent the festive season at his Father’s house at Sandringham, but in early January of 1892 he fell ill with influenza. On the 14th of January his death was announced.

The coffin lay in the Church at Sandringham until the 20th, a service having been held in the Church on the Sunday with the coffin in the centre of the chancel. The Prince and Princess of Wales with their two daughters attended, as did the Princess Victoria Mary of Teck, the Duke of Teck and the Duke and Duchess of Fife. 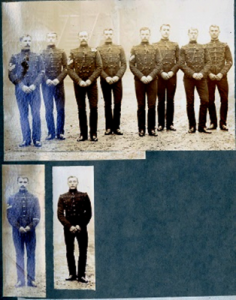 The Pall-Bearers. N. C. O.s and men of the Tenth

Seven days after his death, on the 20th, the coffin was borne by a party of pall-bearers chosen from N.C.O.s and men of the Tenth from the church at Sandringham to the railway station at Wolferton, some three miles away. From here the train went to Windsor station and the coffin was carried in procession by road to the Chapel at Windsor Castle, where the Duke was buried.

“At Sandringham there had been nothing but the gun-carriage, the Hussar’s Busby on the coffin, the flag and the horse artillerymen to bring home to the spectator the fact that our lost Prince had been a zealous young Officer” …… “but at Windsor all was sternly and solemnly military. The Prince of Wales, who had lost his son, wore his uniform as colonel of the Regiment which had lost an Officer.” 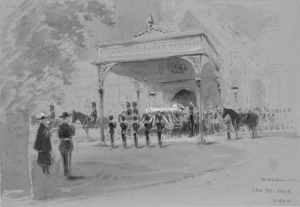 The Tenth Form the Guard at Windsor Station

Simultaneously with the funeral service at Windsor memorial services were held throughout the country, and at Osborne on the Isle of Wight where Her Majesty the Queen attended a service led by Canon Duckworth. The Duke of Clarence was in his twenty-ninth year, and had severed with the Tenth for 6 years 191 day

His Royal Highness the Duke of Clarence and Avondale, A Memoir.     James Edmund Vincent

The Picture of the Guard at Windsor Station is from the Royal Collection. Permission to reproduce it here was kindly granted by Royal Collection Trust/   © Her Majesty Queen Elizabeth II 2016