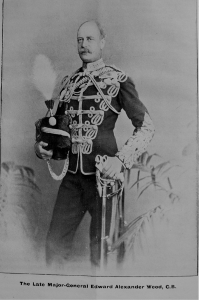 On the outbreak of the war against the Afghans in 1878, he made all the preparations for the Regiment proceeding on active service, and took it to the seat of the war; he commanded at the assault and taking of Fort Ali Masjid, and remained in command until the arrival of Lord Ralph Kerr from England, at Jellalabad in March 1879. He was present at the operation in the Laghman Valley, and was mentioned in despatches, and received a brevet of Lieut.-Colonel. He was employed during the campaign in various independent commands, and on arrival of Yakub Khan, the Amir of Afghanistan, at Gandamak, Colonel Wood, with the ill-fated Sir L. Cavagnari, escorted him to his camp.

He succeeded to the command of the Regiment, on the retirement of Lord Ralph Kerr, on the 31st May 1881, remained in command during the remainder of the Regiment’s service in India, and embarked with it on board H.M.S. Troop-ship “Jumna” for home on the 6th February 1884. M/I Battery R.A. also embarked.

On the following day the ship called at Vingorla, where the 2nd Battery R. I. Fusiliers, a home-going Regiment was taken on board.

On the 14th February, when about twenty miles outside Aden, the S. S. “Amberwitch”, a despatch vessel belonging to the Indian Government, intercepted the “Jumna” with orders for her to put into Aden. On arrival there instructions were received to take on board equipment, and proceed with the utmost speed to Suakin, in the Red Sea. Camp equipment was draw, and with the Regiment being without horses, was hastily equipped with Infantry rifles, waist belts and bayonets. Soda water bottles were issued to the troops, which the “handy men” of the “Jumna” converted to serviceable water bottles by covering with sail-cloth, and adding slings made of the same material.

The rifles and bayonets were, to the intense satisfaction of all, found on arrival at Suakin to be unnecessary, as horses of Baker Pasha’s Cavalry and the Egyptian Gendarmerie were there transferred to the Regiment, and the 10th were not called upon to play the role of infantrymen.

The ship was in quarantine, and the troops on board performed the role of coaling, and it was a very grim but pleased lot of soldiers who paraded that evening on the troop-decks, to hear Colonel Wood read a telegram from home announcing they had been selected for active service against the famous Arab leader Osman Dinga.

The scene was one which cannot be forgotten by any who were present. The Colonel, surrounded by Officers, Military and Naval, stood on the quarter-deck and read by the light of the ship’s lantern, held by one of the crew; the fitful ship’s lights illuminated not only the upturned coal-begrimed faces of the cheering soldiers and sailors, but also the pallid grief-stricken ones of the weeping women and children of the Regiment, the wives and children of the soldiers, who, until that day, had been looking joyously forward to the English homes, to which their husbands and father were returning after, in some cases, fourteen or fifteen years in India.

The whole of the families went up to Suakin, but were subsequently transferred to the troopship “Serapis” and sent home.

Colonel Wood, on disembarkation at Saukin, and until the arrival of Sir Herbert Stewart from England, was appointed to the command of the Cavalry Brigade; he commanded the Regiment at the actions at El-Teb and Tamaai, received the medal and clasp, the Khedivial Bronze Star, was mentioned in Despatches, and appointed a Companion of the Order of the Bath.

On the conclusion of the campaign in the Soudan, he took the Regiment home, and in the autumn of 1884 was ordered to attend the movements of the Austrian Army for the purpose of reporting on the cavalry of that nation.

On the 31st March 1886, he was appointed Inspector of Auxiliary Cavalry and Second in Command of the Aldershot Brigade; on completing his period of four years in this employment, he succeeded to the command of the Regimental District of Hounslow, was promoted Major-General, and commanded the troops at Shornecliffe Camp until his death in 1898.

Of a family of which no less than six members have served with the Tenth, no more devoted Tenth Hussars than Colonel Wood ever lived; his first thought was of and for the Regiment, and the welfare of those in it. No Commanding Officer ever possessed a more intimate knowledge of his men than did Colonel “Eddie” Wood; none could possibly be better acquainted with their habits and qualities. Not a man whose name did he not know, and very few of the nicknames, which in his day were given to nearly all the Regiment, with which he was not familiar. He also was known to the men by a nickname which to this day distinguishes men of the same name.

At all times exacting the strictest attention to all duties, and exercising that rigid discipline which was a feature of bygone days, he endeared himself to the men, who admired his soldierly qualities, and his never-ceasing efforts to retain for the Regiment its acknowledged premier position in the Army.

An abiding memento of his constant regard for the comfort of the soldiers under his command exists in the “Eddie Wood” Soldiers’ Home at Shornecliffe, a much-need institution, the idea of which was conceive by him, and the building established under his immediate supervision.

A striking proof of his affection for his old Regiment was given a few days prior to his death, when the asked the ten Commanding Officer, that the Band might attend his funeral. Needless to say, consent was readily given, not only the Band, but a large number of Officers, past and present, and of serving N. C. Officers and men were present in the Shornecliffe Cemetery when the “Last Post” sounded, and the Regimental Hymns were played over the final resting place of a gallant Tenth Hussar.

He was an excellent horseman, who took a prominent part in the Regimental Races, in which he rode many a winner: he was a regular polo player: as a wicket-keeper he had few equals in the Army, and for many years he as a member of the Regimental Cricket Eleven.