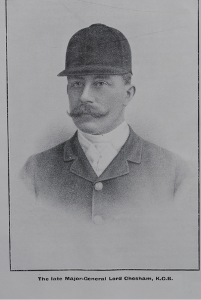 Charles Compton William Cavendish, third Baron Chesham, was born on the 13th December 1850, entered the Army as Ensign and Lieutenant in the 1st Battalion, Coldstream Guards on the 30th March 1870, and was transferred to the Tenth as Lieutenant on the 1st January 1873.He served with it in India to the 23rd January 1878, when he exchanged into the 16th Lancers, retiring from the Army in the following year. He was the Adjutant of the Tenth from the 1th February 1876 to the 12th October 1877, when he vacated the appointment on promotion to Captaincy; thus it will be seen that by far the greater portion of his soldiering was with the Regiment with which he specially identified himself to the end of his days – days which may be said to have been wholly devoted to his country and his Sovereign.

His father, the second Baron Chesham, served in the Tenth successively as Cornet and Lieutenant, from the 30th August 1833 to the 27th March 1840, and we sanguinely anticipate that the near future will witness the re-appearance of this name, honoured by all ranks on the roll of the Regiment. It was not Lord Chesham’s good fortune to see active service with the Tenth, but even now, nearly thirty three years after his service in the Regiment, his reputation lives as a smart soldier, as keen supporter of every form of sport, promoting emulation amongst those under him with the wonderful tact and urbanity which were characteristic of him at all times, and under all circumstance; and loved by all.

In India he won distinction on the polo ground, on the race course, and in pigsticking, for in 1877 the Kadir cup and the Ganges Cup came to the Regiment, the latter to Lord Chesham who had a fine record of “first spears”.

Soon after leaving the Army, he succeeded another Tenth Hussar, Lord Valentia, as Master of the Bicester, and hunted that famous pack for many years. The High Sherriff of Buckingham, speaking of Lord Chesham in that capacity, said “probably the hounds never had a better Master”. – perseverance, self-control, unselfishness, pluck and endurance – which endeared him to his field, who naturally all readily obeyed his command. He was the type of man England alone produced, and whose example the young men of the country should try to follow.

He will perhaps be best remembered for his services in the South African War: on the outbreak of hostilities he volunteered his services, and most prominently helped to raise the Imperial Yeomanry. Quoting Lord Roberts, – “Lord Chesham was one of the first to realise the necessity for a large number of mounted men being required for the war; it was in great measure owing to his capability, and his habit of organisation, the Imperial Yeomanry was formed and sent to that country”. During the war he proved himself to be a most gallant leader, and at the close of the war he performed valuable service as Inspector-General of Imperial Yeomanry. He commanded the Buckinghamshire Yeomanry before the war, and raised that Regiment to a state of efficiency rarely equalled, never surpassed, by our Auxiliary Cavalry. Many measures introduced, it is said, bear testimony to Lord Chesham’s old association to the Tenth.

In South Africa he commanded a Brigade of Imperial Yeomanry, and was a Brigadier-General on the Staff.

He served with Lord Methuen, and with Sir Charles Douglas, round Boshoff and Kimberley, and was present at the Relief of Kimberley, the battles of Lindley, Rhenoster River, and Venterstrom, and in the pursuit of Colonel Villebois, whom the Yeomanry overthrew. Speaking of him as a Yeoman, Mr Norman McCorquodale declared that “As Colonel of the Yeomanry his men loved him, and those who served under him in South Africa spoke of his great work out there. They all remembered how nobly he responded to duty’s call, risking his own life, and that he gave the life of his eldest son to this country”.

Lord Chesham held that appointment of Master of the Royal Buckhounds, and was Lord of the Bedchamber to H. R. H. The Prince of Wales, now His Majesty King George V.

His death, while hunting with the Pytchley Hounds caused widespread regret amongst a very large circle of all classes in England, particularly in Buckinghamshire, his own county, where he was known from his earliest youth; he was brought up there and associated with all in the country. The inhabitants, to perpetuate the memory of their fellow county-man, determined to give tangible proof of the affection and admiration that they felt for him, resulting at Aylesbury on Thursday, the 14th July last, in one of the most brilliant and impressive ceremonies the county has ever witnessed.

On that day, in the presence of a huge concourse of people, representative of every class, a statue to the memory of Lord Chesham of which a photograph is here reproduced, was unveiled by Field-Marshal Lord Roberts V. C. 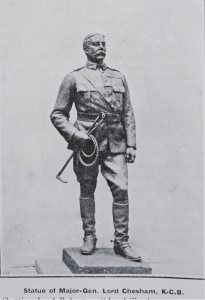 Representing the Tenth on the occasion were Lord Valentia, Colonel St Quintin and Captain Kearsey.

In performing the ceremony entrusted to him, Lord Roberts deplored the loss of a dear friend, who was a fine soldier, a true gentleman, and, in the highest sense of the word, a sportsman: his (Lord Chesham’s) many sterling qualities endeared him to all, and made him – and rightly made him – one of the most popular men of his day. Many knew him as a country gentleman of the best type, and a neighbour; others as a good, bold rider, a successful Master of Hounds, and a good shot. But others knew him as a keen and gallant soldier. What all valued, and what was so attractive in Lord Chesham, was his manliness, his straight-forwardness, his large hearted generosity, and his cheerfulness in all circumstances, which, added to his lovable nature, made him the best of comrades”.

The Band of the Grenadier Guards, conducted by a former Tenth Hussar – Lieut. William Mus. Doc. – was in attendance, and at the moment of unveiling, by the special wish of Lady Chesham, the Regimental evening hymn was played.

We rejoice that fitting honour has been done to the memory of this Tenth Hussar who may be best described by dubbing him “Gallant soldier, great sportsman, perfect type of Englishman,” who brought honour to his country by his gallantry on the battlefield, and by his wonderful power of organisation, proved in a remarkable degree, during the early days of the South Africa War.

His cheerful sacrifices on behalf of his country in the hour of need will never be forgotten. His death was one he would probably chosen for himself. At Daventry in Northamptonshire stands a cross to mark the spot where his horse fell and a brave man went to his rest.

Lord Chesham’s noble example cannot fail to inspire the young men of England with lofty and patriotic thoughts; his memory will endure forever in his Regiment – The Tenth.